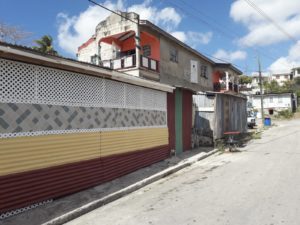 Area where Lester Holder was shot

Following two gunshot murders in one day and 14 murders in just two months, Barbadians are calling for drastic action including possibly resuming hanging.

That was the opinion of some of the people who saw the latest victim take his last breath after being shot outside a shop at Clevedale, Black Rock, St. Michael about a quarter to eight last night.

People from the area told Starcom Network News that 47 year old Lester Holder was liming outside a shop with about four or five other men when they heard an outburst of gunfire, possibly about four shots.

One of the men was hit in the leg while Holder, who lived at nearby Grazettes, was fatally wounded as he sat in a wrought iron chair outside the shop where they regularly hung out. He died at the scene.

The victim’s sister and mother Tonya and Patricia Holder said the construction worker was an easy going man and they don’t know what happened to provoke the attack.