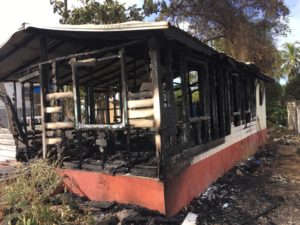 The Bank Hall St Michael community is this morning still in shock after a late night fire claimed the life of one of its residents.  Seventy six year old Eric Fenty died in a blaze the consumed his wood and wall home around 11:20 pm, despite efforts to save him.

Police say a passer-by had seen a small fire at the back of Fenty’s home and raised the alarm.  The passer-by tried to gain entry through a side door but was unsuccessful.  He then got help from another male, entered the home, and tried to lift the elderly man who was in his bed, out to safety.  However, the heat and smoke forced them to flee.

Mr Fenty perished in the blaze.

Two fire tenders, with ten officers under the command of Divisional Officer Ernle Fields, responded to the scene.  There were no reports of damage to other property.  Police investigations are continuing.