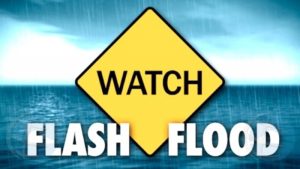 A flood watch is now in effect for Barbados.

It was issued by the Barbados Meteorological Service today at 12:30 p.m., and is expected to remain in effect until 6:00 p.m.

Acting Director of the MET Office, Sonia Nurse, explained that a band of showers propagating northwest-wards from Potential Tropical Storm No. 2 will bring some moderate to heavy showers across Barbados this afternoon.

She warned that these showers will be accompanied by brisk surface winds of 25 to 35 knots (35 to 50 km/h) with higher gusts near showers.

“Rainfall accumulations of one to two inches (25 to 50 millimetres) are possible [and] some flash flooding is likely in low-lying areas,” she cautioned, noting the flood watch meant flooding was possible.

As a result, a high-surf advisory and small-craft warning is in effect for Barbados until tomorrow, Tuesday, June 20.