Minister in the Ministry of Housing, Charles Griffith, today promised relief to tenants of Government-owned housing estates, who are complaining about Government’s poor maintenance of the units.

Mr. Griffith says that the National Housing Corporation (NHC) has already started work to fix a number of issues and that the units will have their electrical wiring upgraded as part of the divestment programme under which government is granting ownership of the units to their long-time tenants.

Mr. Griffith spoke as he tabled a resolution in the lower house this morning to vest the NHC land at Colleton Plantation in St. Lucy, for the purpose of housing development.

He said that the NHC is cashed-strapped partly due to what he says is the previous administration’s mishandling of the state-owned entity and there will need to be partnerships with the private sector to fix the issues they now face.

The minister adds that one of the main issues is overcrowding in the housing units, which he believes can be resolved by giving people more opportunities to purchase land outside of urban areas. 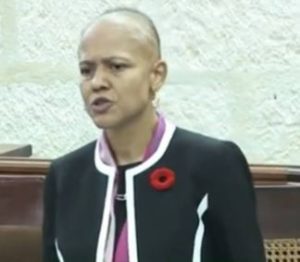 Meantime, in a passionate address to the House, Minister of Education Santia Bradshaw, the MP for St. Michael South East where a teenaged boy plunged to his death in a well with a faulty cover, called for urgent action to be taken to fix the problems and for people to be held accountable.

Ms. Bradshaw called for someone to be held account for what transpired.