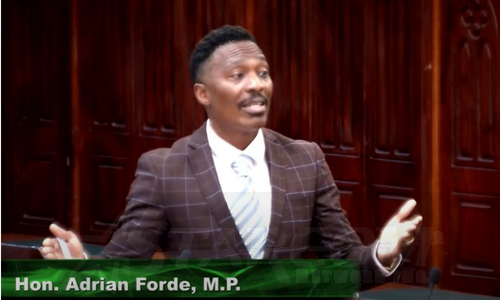 Environment Minister Adrian Forde has defended Prime Minister Mottley’s overseas travel in the face of criticism from the Democratic Labour Party arguing that Miss Mottley’s trips are benefitting not just Barbados but the entire region.

Mr. Forde came to Miss Mottley’s defense as he tabled in the House of Assembly the Barbados National Diversity Strategy and Action Plan.

He argues that Miss Mottley has become a leading voice for Barbados and the Caribbean and in fact for developing countries across the world.

He further contends that through her efforts Barbados has been able to secure significant funding and other assistance.

Mr. Forde outlined a twelve point  biodiversity action plan as he described the loss of biodiversity is an existential threat.

A one of the first steps will be a roll out of a communication plan to help the public understand the magnitude of the problem.

He highlighted some of the challenges some of the chopping down of some of the last remain forest areas and rampant dumping in gullies which was identified by an assessment study.

Minister of the Environment and National Beautification Adrian Forde.

But DLP Vice President Paul Gibson remains unconvinced by the defense of the Prime Minister’s travels.

Over 3000 public servants to be appointed