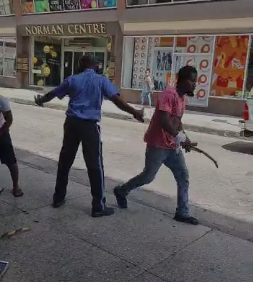 There was a bloody brawl this morning between two women and a man on the sidewalk outside a credit union branch at Upper Broad Street, Bridgetown.

One of the women was stabbed several times and her assailant was later held in another part of the city not far away from the scene of the stabbing.

A taxi driver who operates in the area and witnessed the incident tells Starcom Network News  it appeared the man retaliated after some physical contact between the individuals .