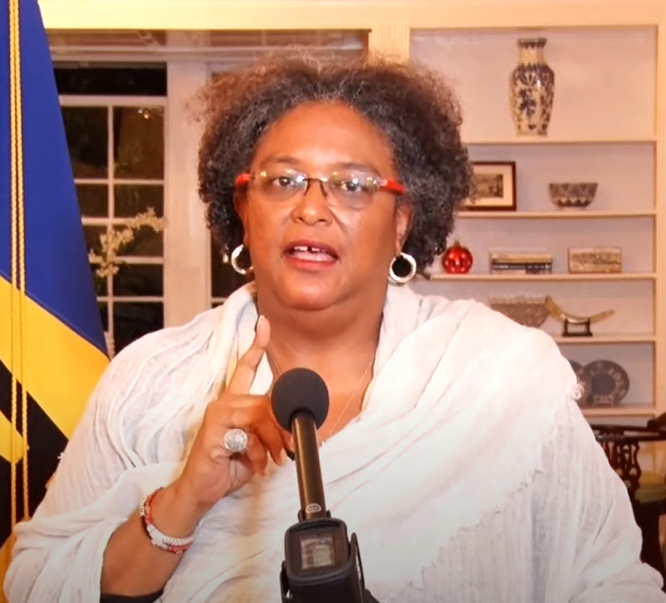 Prime Minister Mia Amor Mottley has announced the proposed reintroduction from Sunday of an alphabet system for banking and shopping at supermarkets and hardware stores and also announced the appointment of a high-level health communications team as she declared Barbados is not yet out of the woods but in a much better position than a week ago in dealing with an upsurge in COVID-19 cases.

Mask wearing is also to be made mandatory in all public buildings and on all public transport, but the borders are to remain open.

Prime Minister Mottley stressed the importance of communicating with the public on the pandemic situation and announced current ambassador to the United Nations Elizabeth Thompson is moving to a new role as head of a new health communications unit that also includes the President of the Barbados Association of Medical Practitioners, Dr. Linda Williams.

Ms. Mottley apologised for delays with the test results, as did the health minister, noting that the large volume of tests including two thousand in one day created some difficulties,.

She spoke of steps to resolve the problem such as a new system to ensure better communication of the results that includes compiling the results electronically.

Meantime, the Glebe and Brandford Taitt Polyclinics will be reserved for tests for people in the primary category including frontline workers and additional doctors and other medical personnel have been requested from the Cuban government.

PAHO will send a virologist to train lab staff and a mobile lab is to be purchased from the China.

Barbados is also seeking to expedite purchase of the vaccines and should get a handful of doses by weekend which will be administered to four people, the head of infectious diseases, Dr. Corey Forde, the health minister and probably Prime Minister Mottley herself.