Acting Prime Minister Santia Bradshaw reports two new COVID 19 cases, members of the administrative staff of the National Assistance Board (NAB).
She describes the mode of transmission as worrying since they were connected to 3 earlier cases, all NAB employees meaning that so far five staff members of the NAB have tested positive for COVID-19.
Minister of People Empowerment Cynthia Forde says the situation is not yet at crisis level. However, she notes the five positive tests resulted from one of the staff members being in contact with a previous case.
She says all 40 administrative staff of the National Assistance Board have been tested for COVID-19 and all 225 NAB employees will be tested.
The NAB is the government department that administers the home help program for senior citizens. Ms. Forde stresses it’s unlikely the administrative staff came into contact with the home helpers dealing with the vulnerable elderly. Another 105 NAB staff are being tested today.
All staff of the NAB are being quarantined in local hotels at government’s expense.
Health Minister Lieutenant Colonel Jeffrey Bostic said in total 175 tests were conducted overnight. An additional 104 people will be tested today and the remainder tomorrow as they intend to get on top of the situation through extensive testing and contact tracing.
The minister appealed to people with symptoms to come forward to be tested. 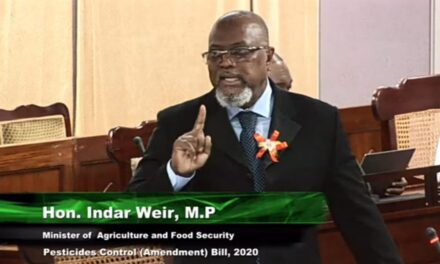 CHIEF AGRICULTURAL OFFICER APPOINTED CHAIRMAN OF THE PESTICIDES CONTROL BOARD