About 30 former employees of the Caribbean Broadcasting Corporation who were retrenched last year say they have been fighting to get their pension for the past seven months to no avail.

Spokesman for the group and former news editor at CBC Peter Thorne says the former workers emailed the state-run entity since February informing the corporation that they were exercising their option to take early pension.

He says CBC has refused while insisting that they were not eligible for early pension.

However, Mr. Thorne says that according to the Occupational Pension Benefits Act, the workers are entitled to pension and he contends that CBC is illegally withholding their money.

Meantime, the workers who gathered at the Queen’s Park Gazebo for the press briefing this morning said that not being given all of their entitlements has been really burdensome for them. 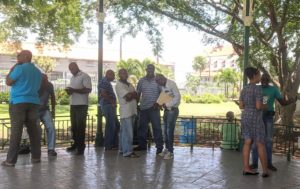